A CANBERRA BOY ON AN AUCKLAND BUILDING SITE

A CANBERRA BOY ON AN AUCKLAND BUILDING SITE 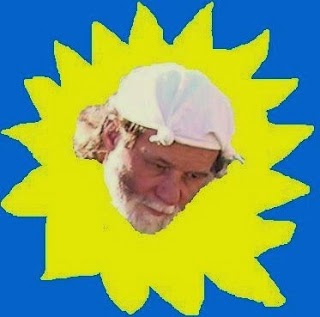 I’ve known several blokes who have been called “Gibbo.” One  who I grew up with in Canberra and also played rugby with for many years was named Brian Gibson. Unfortunately he died in or around 1982 in a car accident, which was tragic. He was a very nice bloke and I am not saying that because he's no longer with us. I know nobody who disliked him.
Another Gibbo I knew was a large and powerful Maori bloke who I worked with when I lived in New Zealand. He had the surname of Gibbons. I can't recall his first name as nobody used it. Australians and New Zealanders have a tendency to abbreviate given and surnames and sometimes put vowels on the end because it seems to make them easier to say. I suppose it comes down to laziness.
The Gibbo I knew in New Zealand was also a very nice bloke. I will refer to him as Maori Gibbo for the rest of this yarn as opposed to the Canberra Gibbo. Maori Gibbo and I worked on a building site near Karangahape Road in New Zealand in early 1972, which was when I first lived in New Zealand. I was in my 20th year at the time, aged 19.
Sometimes stray thoughts of Maori Gibbo come to me, and when we remember people we knew many years ago we tend to imagine them looking like they did at the time. I still picture him as aged around 40, which to me is now relatively young. It dawned on me however that if he still has a pulse he would be in his 82nd year, which means there's a good chance I missed his tangi.
I regret not having kept contact with Maori Gibbo after I stopped working with him as we got on really well and I never thanked him for what he did. I am indebted to him because he kept me amused during the 8 hour day, which made an otherwise extremely boring job far less boring than it would have otherwise been. He at times made it very enjoyable.
In elaborating; I never enjoyed most of the labouring tasks I was given on building sites. I did get some relief on the Auckland site when the cement trucks arrived and we had to carry concrete in wheelbarrows up planks, as the physical effort got my endorphins pumping. Relief however also came when Maori Gibbo entertained me. He had a very sophisticated sense of shit-stirring deadpan humour and was a great raconteur. I would go out of my way to encourage his misbehaviour and we both pushed the boundaries because of our shared need for stimulation.

But, instead of staying out of it and letting nature take its course, I had encouraged Gerard by telling him how he could go about getting away with giving Graham an unnecessary hiding. It took a while for me to learn to think before opening my mouth, and I made a concerted effort to do so after I left that building site.
Sure enough the setup began to look like it was going to  work. Gerard pretended he feared Graham and the more he pretended to fear him the more abusive towards Gerard stupid Graham became. Gerard should have been given an academy award for his acting ability.
Where the plan went wrong was that eventually Gerard tired of acting, and as he had warrior genes he could only hold back for a certain amount of time. He had hoped that Graham would have thrown a punch at him or challenged him sooner, but it did not happen. Graham just continued to insult Gerard and Gerard's anger continued to increase.
Obviously it was going to come to a head, but when it did I was not present, although I did see the aftermath of the event and what occurred was relayed to me in detail by several observers.  At the time it occurred I was trying to start my Indian Scout motorbike, as it was after knockoff time and it had been giving me problems due to it having an intermittent sticking carburettor float and an intermittent electrical fault.
The incident occurred in the lunch sheds when Graham and Gerard were getting their gear before going home.  While one was coming in and the other going out Graham called Gerard a nasty name, and Gerard, who could contain himself no longer, walked up to Graham and delivered to him a very hard slap across the face. Apparently Graham, who could see Gerrard's confidence and feel the weight of his slap, just stood there like a stunned mullet and did not say a word.
I saw Graham walking off the site after the event. Half his face was red and inflamed but the whole of his face carried a sheepish and disturbed look.
It all turned out okay. Neither Graham nor Gerard suffered any permanent physical damage as a result of my advice, the bosses did not know about what happened and Graham was put in his place. We never heard a peep out of Graham after that, although I doubt the incident was enough to turn him into a good bloke. He probably only tried to bully very old men, very young boys, quadriplegics and people with very advanced cancer after that, just to ensure the odds were heavily in his favour should a physical conflict arise.
There is no shortage of Grahams in this world. It’s such a pity they are not sterilised once they become old enough to reproduce.
Not long after the slap the owner of the company had a heart attack on the job and died before our eyes. I described the incident in “Tales of a Canberra Boy.” 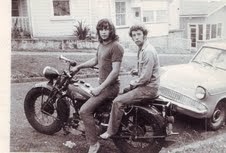 The 1972 photo above shows me with my mate Blackie Blackburn from Wellsford who is on the back of my Indian Scout, which was the motorbike I was trying to start at the time Graham received a very hard slap across his face.

FOR MANY MORE MAINLY CANBERRA-BASED YARNS HIT THE "HOME" BUTTON UP THE TOP.
Posted by Dave Wheeler at 13:40