A CANBERRA BOY IN THAILAND (CONTINUED)

INTRODUCTION TO THE FOLLOWING POST
The last post on this site was in the form of a recent email from a mate by the name of Tony Quinn, who is visiting Thailand. In it he described what happened to him after he ate off seafood at a Thai restaurant. He is still in Thailand at the time of this post and I received the following true story from him in the form of another email on the 10/2/14.
Dave Wheeler 10/2/14.

A CANBERRA BOY IN THAILAND-A CONTINUATION FROM THE LAST POST
By Tony Quinn
Gooday you mongrel,

A mate of the Mrs rang yesterday morning to ask if we would like to go with her and her husband to visit a temple a couple of hours drive north of Bangkok on the road to Lopburi. I jumped at the chance as it had been several days since I had been to a temple (sarcasm).
They picked us up a few hours later and off we went. The temple is a large establishment and is a rehabilitation centre for drug addicts. Western drug addicts also reside at the temple. Evidently the hardest addicts to cure are the glue and petrol sniffers.
We spent quite a lot of time at the main temple as it contained some Buddha images and relics. There were a lot of coloured lights around a structure in front of the images. On closer inspection the structure was a large glass tank filled with water containing the body of a head monk who died 3 years ago.The head of the head monk, with its hair supposedly still growing, was pressed against the side of the tank. A live monk in the hall came over to tell us the details of the preservation of the body. Next to the tank was a bottle containing water with a yellow substance floating on top. The substance was fat from the dead monk's body! I was surprised that the body could be preserved only by using water.
The live monk told us how every so often he would drain the tank of water,remove the body and clean it up. He switched on his computer and showed us the various images of the body. He would remove the dead skin and dead finger and toe nails which he said would grow back. He obviously enjoyed his work as he had a big smile on his face. He also said there were another 5 bodies out the back in a similar state. It was like a house of horrors!
We left the hall and went to a different part of the complex where the abbot was. We sat with him discussing various topics (I could not understand a word as it was in Thai). The husband went and sat at a table and started eating a bowl of soup. He waved me over to join him. I hadn't eaten since I had a breakfast of oats and bananas so I was quite hungry. He was hoeing into the soup so I thought it would be okay. It was a grey, slimy gruel and floating in it was what appeared to be fish balls and raw chunks of liver. The fish balls ended up being bird's eggs. I ate about a third of the bowl. The stomach would not take any more.
We went back over and sat near the abbot and he gave me a ring with a precious stone attached plus a stone by itself. These he said would bring me good luck and good fortune. He then offered me a glass of water to drink. It was very cloudy-looking so I declined, saying I had a weak stomach. He said the water had healing powers and would cleanse my body of illness and injury. I still declined as the thought of my recent food poisoning was still in my mind. He assured me the water was okay and proceeded to dip his finger into it and dab the water droplets onto his tongue. Against my better judgement I lifted the glass and gulped the contents down. Maybe the water would cure my training injuries. The water tasted foul and I grimaced.
The abbot then told me where the water came from. You wouldn't believe this, but the water came from the tank containing the dead body! I was shocked! No wonder the water looked cloudy and tasted so foul! I didn't know what to say. I wondered how long it would take for the symptoms of cholera to appear.
The abbot then produced a bottle containing a dark brown liquid. The drug addicts drink it and it makes them vomit uncontrollably. It's part of the cure. I was tempted to take a swig.
Shortly afterwards we headed home. We stopped off for dinner at a restaurant but I wasn't in the mood for eating.
I have attached a photo of the abbot. The brown drink is to his right. 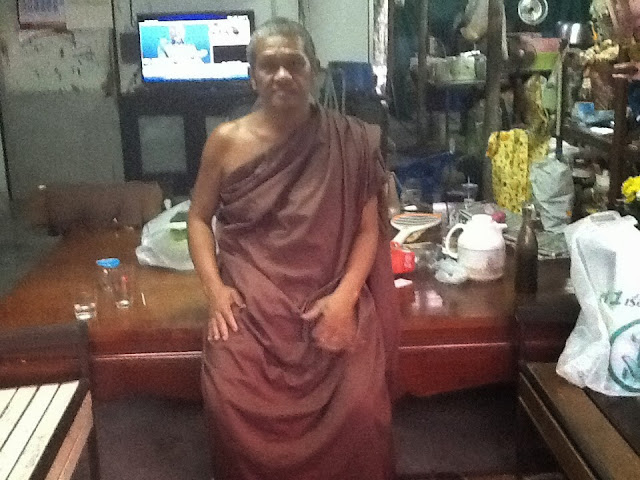 FOR MANY MORE MAINLY CANBERRA-BASED YARNS HIT THE "HOME" BUTTON UP THE TOP.