ANOTHER "CANBERRA BOY IN THAILAND" YARN - a confrontation with a large monkey on Koh Chang Island.

ANOTHER CANBERRA BOY IN THAILAND YARN
by Tony Quinn
It was late September 2012 when we flew from Bangkok to the city of Trat in far eastern Thailand close to the Cambodian border. From there we boarded a ferry for the one hour trip to Koh Chang Island. Koh Chang is the second largest island in Thailand. Over 70% of the island is covered in tropical rainforest with topography ranging from high mountain peaks to white sandy beaches.
After arriving on Koh Chang Island, we took a taxi to a resort located at the southern end of White Sand Beach. The main road from the pier runs along a contour line quite a way up the side of a mountain range. The track leading to the resort is made of bitumen but is very steep, winding and covered in overhanging rainforest. On the way down to the resort I thought to myself what great fun it would be to run back up the hill to the main road.
The resort was virtually deserted as it was the low season due to the daily monsoonal rains. After checking in, I put on my running gear including my 5 toed Vibram runners and away I went up the hill.
The legs were really working, the heart and lungs were pumping and the sweat poured off me due to the heat and humidity. I was really enjoying myself until about half way up the hill when I rounded a bend and noticed some monkeys on the track ahead. Could be trouble I thought and with good reason.
I have had problems with animals in Canberra and elsewhere, particularly when I am out running. Goshawks and magpies have attacked me on several occasions in the berra, as has a spur winged plover. I was also threatened by a large kangaroo when I was doing survey work west of Bourke. Had the roo sat on its tail and disemboweled me with the sharp claws that are attached to its powerful rear legs it would have ruined my day and made it very difficult for me to focus on the calculations I was required to do for the job.
Being bitten on the leg by a large dog outside a public toilet in Iran was also not a very pleasant experience.
As I reached the monkeys, I called out politely to them, asking them to get out of my way. Next thing I heard was a loud screech behind me. I looked around to see a large male monkey rushing out of the jungle straight at me. 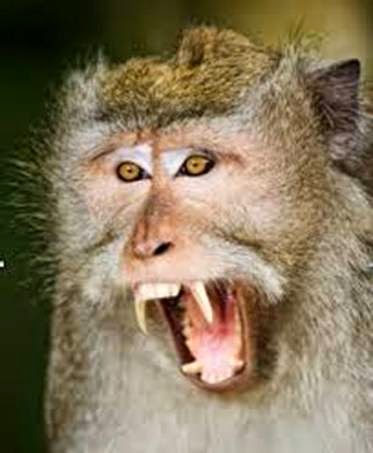 It was screeching and hissing, mouth wide open with large yellow fangs hanging out. I thought it was going to jump on me and rip me to pieces. I came very close at that point to losing control of my bowels.
The second thought that came to my mind was the story I read about the poor woman in the USA who had her face ripped off by a monkey and recently had a  face transplant. “That's going to happen to me,” I thought as I started running backwards up the hill at 100mph whilst at the same time yelling expletives at it as it chased me. I may not be Asian but I don’t like the idea of losing face.
The monkey was very solidly built much like a dwarf on steroids. It had dark brown hair sticking straight out on either side of its head. All the years of martial arts training came to nought as my mind went blank as far as a self defence strategy went. Running away was the only instinctive thing I was capable of. After I had run backwards for some distance away from the group of monkeys the male monkey stopped chasing me. I was still wary so continued running backwards up the hill for several more minutes.
Eventually I reached the top of the hill. I hadn't had enough exercise so I walked about 100 metres down the hill and did some sprints back to the top of the hill. On the fifth one I pulled a calf muscle. I couldn't help myself so I did another sprint which made the calf even worse.
I then wondered how I was going to get back down the hill to the resort. I could walk along the main road for miles and make my way to the main beach then come back to the resort along the beach front but that would take hours particularly with my torn calf muscle. I looked around and found a large branch to use as a weapon against the monkey then started limping down the hill.
A few minutes later a young Thai bloke on a motorbike stopped and asked if I wanted a lift. He was very friendly and smiling. Looked like he was wearing lipstick and makeup. What a choice – I could accept the lift and maybe end up with a sore arse and a dose of AIDS because for all I knew there may have been a gang of lady boys waiting for me. Or I could walk down and possibly get my face ripped off. It was a difficult decision but I went with the faceless option and declined the lift. I am proud of the fact that my arse is still a virgin.
I continued walking down the hill and started waving the branch around as I approached the monkeys. I couldn't see the one that attacked me - thought he may be up a tree waiting to drop on me so I waved the branch above my head. I managed to get through and past the monkeys without incident. Decided to stick to running on the beach from then onwards.
Tony Quinn

FOR MANY MORE MAINLY CANBERRA-BASED YARNS HIT THE "HOME" BUTTON UP THE TOP.
Posted by Dave Wheeler at 01:33