A CANBERRA BOY EXPERIENCES ALTERED STATES OF CONSCIOUSNESS AT THE CIVIC YMCA AND IN DOING SO MAKES AN ARSE OF HIMSELF TWICE IN ONE DAY
By Dave Wheeler
As I’ve reminded the reader in previous posts, within Australian culture, or for that matter virtually any culture, you’re not supposed to talk about yourself too much, and if you do it's best to do so by way of putting yourself down. I have definitely done the latter in this essay/anecdote/rave, as it shows up some real flaws in my makeup, or at the very least the makeup I possessed as a young man, even though what was and was not me at the time is debatable. And if what I just said makes no sense to you it may as we progress.

It's also difficult to not talk about yourself if your personal experiences are intertwined with how you see things, particularly if you’re putting forward philosophical reasoning when the reasoning revolves around one’s personal experiences, which is what I will attempt to do. Actually, personal philosophies are created by combining acquired knowledge with personal experiences.
Putting that aside, some who read this essay may get a laugh at my expense, but it is mainly for the benefit of those who are interested in how the brain and mind may work and/or who are philosophically-inclined.
So, be warned; if you have no interest in philosophy or how the mind and brain works, or if you have a small attention span, I advise you to read a different anecdote or essay within this blog by simply scrolling down or hitting the “Home" button and making a choice. You could also close your computer and go on a shopping spree in Captains Flat.
I would also like to say that if you are not familiar with aggressive Rationalist philosophy and have not made yourself consciously aware of the implications of our bodies (which of course includes our brains) being a part of the material universe, and as such subject to the forces of the universe that act upon them, much of what I have to say you may regard as insane. It may even seem insane to those who subscribe to religions that require followers to believe in the supernatural.
What I have to say relates to certain events I experienced within the walls of the since demolished YMCA in Civic, even though I rarely visited the place when it existed.
The first event at the Civic YMCA that involved my having an altered state-of-consciousness I regard as a fascinating but negative experience. I didn’t make an arse of myself on that occasion but I was very confused during and after the event as it seemed to defy logic.
My memory tells me the event may have occurred in 1971, but it probably occurred in or around mid 1970. On the night it occurred I had been at the Canberra Rex with my mates when one of them, a lad named Terry Gates, asked me if I could take him to the YMCA in Civic where his girlfriend was playing basketball so we could give her a lift home. Terry did not own a car.

I didn't know the girl very well, but I remember her as an attractive girl a couple of years younger than me, and my faded memory also tells me her name was Megan and that she went to Lyneham High. But, I’ve received a lot of blows to my 1952 vintage head, and because I was a forceps baby for all I know her name may have been Sheila, Cheryl or Beryl and she may have been a hairdresser from Queanbeyan.
Update-January 2020. I recently found out my memory is correct and her name was and still is Megan and she did go to Lyneham High. I was told this by a good mate of hers who is a good mate of mine. They still stay in contact with each other. It’s easy to worry about dementia planting false memories in your brain as you age. 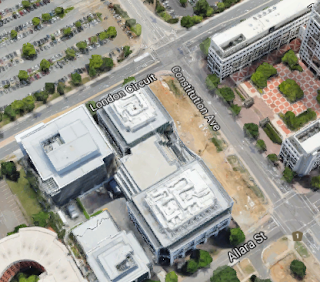 The Civic YMCA, which has since been bulldozed, was located at the corner of London Circuit and Constitution Avenue Civc, as shown above, where the Department of Foreign Affairs and Trade building now stands. Imagine the CO2 that was produced when the current buildings were erected. 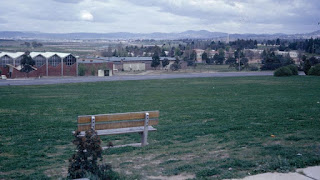 The above is a photo of the said Civic YMCA, which was taken in the 60’s. Thanks to Anne Cameron for finding it for me.
Anyway, I agreed to give her a lift home, and when we arrived at the YMCA I told Terry I would wait in the car while he went in to get her. But, after going inside for a very short period of time Terry returned to me in a state of absolute fear and horror, as if he’d just seen a ghost. He said to me, "It’s packed with sheilas in there! There are no blokes in there at all! I can’t go in there by myself! You’ve got to come in with me!”

I said to myself, “What’s his problem? Surely he can handle a bunch of girls?”Yet Terry was usually a very gutsy sort of lad, and he had never showed any signs of shyness or fear when it came to girls. His reaction was completely and utterly out of character.
So, I reluctantly got out of my car and began walking with Terry through the main entrance of the YMCA. I felt a bit smug at the time, thinking to myself that if I had a girlfriend I had to pick up from the YMCA I would not need a mate to walk into the place with me.
It was however, a very different story when I was actually inside the Civic YMCA, even though I was in the company of another bloke. I felt a sort of fear I had never felt in my life. For some reason unbeknown to me the fear I felt was so strong I had an immediate urge to race outside.
I don’t think I felt fear that was of the same intensity I would feel if I was shoved into a cage with a Kodiak bear, but it would not have been that far off it. The difference however, was that if I was in a cage with a Kodiak bear I would know why I felt fear, as it would be totally warranted. Conversely, when I was within the walls of the Civic YMCA on that night, surrounded by laughing and boisterous teenage girls who were too busy playing basketball or conducting activities related to playing basketball to notice our presence, along with a sprinkling of middle-aged women who were organising the games, I had no idea why I was feeling any fear at all.
After taking a few more steps inside it was all too much. I could have gone on and endured it if it was a life and death situation, but if you’re suffering an intense form of pain of any sort you need a very good reason to not make it stop, and the obligation I had to support Terry by accompanying him was outweighed by the desire I had to get out of the place.
Poor Terry walked on by himself not knowing I had slipped out without telling him. I don’t know if the fear he felt was as intense as mine, but later on he told me that when he turned and saw I wasn’t there he was panic-stricken and didn’t know what to do with himself. That caused me a lot of amusement.
What fascinates me is the question of why the situation gave me such fear. I was not trying to make a line for any of the girls, so my ego was not in any danger. There is no way it could be compared to the fear young men feel when they are about to ask a girl out, not knowing whether or not they'll get a knock-back. And why did Terry react in a similar way to me when it was so out of character for him? I had never before suffered from any form of anxiety, paranoia or had any sort of panic attack, nor have I since the event occurred. And I had been in very similar situations before the event I described occurred and I have been in similar situations after the event. It was only on that one occasion I felt such inexplicable fear.

So, was the state-of-mind I experienced at the YMCA on that one occasion simply the one and only time in my life I suffered a form of mental illness or was there more to it?
I told the story to a workmate several years ago, a lady whose name I cannot recall as I only worked with her briefly. I do however, remember her being a bit new-age and a committed feminist. She told me that Terry and I were probably subjected to a sort of girl-power women can produce when in large groups to protect themselves from males. She said it was by no means an unusual occurrence.
To augment what she was saying she reminded me of the fact that trees can communicate with surrounding trees chemically to protect themselves against herbivores or other things that are a threat to them, and she is correct about the trees as the process has been observed by many reputable scientists. See the following link.
http://www.abc.net.au/science/articles/2015/05/20/4236600.htm
In regard to how the girls may have put up an anti-male shield she came up with two theories. She thought the girls may have created a magnetic field which produced fear in the male brain or they may have produced a collective smell that males could perceive non-consciously, and that the smell may have caused the male brain to feel fear without it being consciously aware of why it felt fear.
It all sounded and still sounds too far-fetched for me and I’m very sceptical, because other than our having been no threat to the girls and there being zero evidence to support the smell or magnetic field theories, there is a simpler theory. To explain, although I don’t know the extent of Terry’s fear, I see the fear I suffered as more likely to have been created by my undeveloped teenage brain without any external catalyst of the kind my workmate described, even though I was not conscious of why I felt such fear and it was the only time in my life I have felt that sort of fear under those sorts of circumstances.
I will however, place a caveat in my criticism of her theories by saying that although highly unlikely, and totally lacking in supporting scientific evidence, the magnetic field and smell theories are not theories that involve the transgression of the laws of physics. Therefore those theories and others like them are possibilities, albeit remote possibilities.
And, if we are to discuss human behaviour in general, when it comes to processes of a quantum nature occurring, such as entanglement, and how we may be affected by, or utilise those processes, our ignorance on the subject is unlimited. 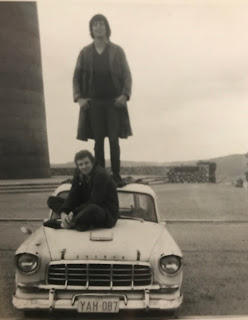 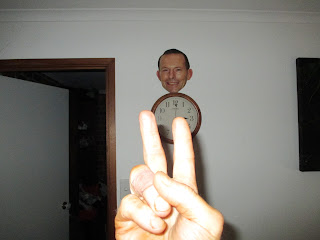 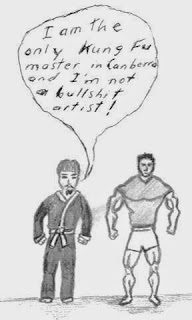 For more mainly Canberra-based yarns hit the Home button above.