A CANBERRA BOY GETS ARRESTED

A CANBERRA BOY GETS ARRESTED
by Dave Wheeler
This anecdote is mainly about my old mate, Brownie, (the late Owen Brown). It is to a lesser extent about a bloke who was employed by the ACT Police Force in 1971, who, in my opinion, brought his organisation into disrepute. It is also about the Apartheid system which once operated in South Africa. It is also about rugby. It is also about injustice.
In regard to Brownie, I could write a book about him. When I get together with my mates he is often the main topic of conversation, as we have a myriad of humorous stories regarding his sense of humour, his propensity for practical jokes and his adventures. Brownie was a highly ethical bloke, even though he had his own code of ethics which some may not have understood, and he was a dependable and loyal mate.
During the year of which I mainly write, 1971, and the years that preceded and followed that year, Brownie and I got up to much that brings a smile to my face. I also had two insane years living with him in Evatt in the mid 70’s, and he features often in the book I wrote entitled, “Tales of a Canberra Boy.”
What I am writing about revolves around the 1971 Springboks tour, and what happened to Brownie when the Springboks played the ACT at Manuka Oval on the 21/7/1971. 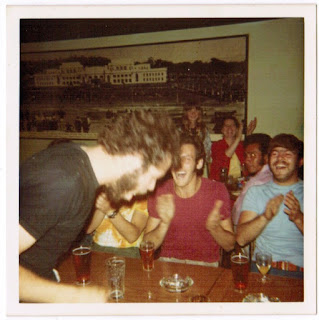 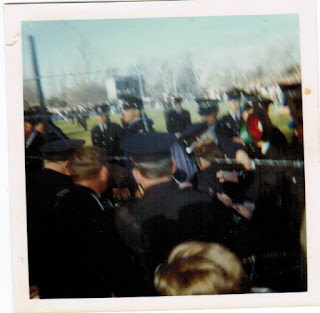 I took the blurred photo above immediately after Brownie was arrested, which shows the coppers taking him away. It’s blurred because I was jostled by the crowd while trying to take the photo, and unfortunately Brownie is not visible within the photo. All that can be seen are the coppers who were carrying him towards the small gate in the fence at the time.
Brownie told me that after he was arrested and placed into the paddy wagon with a bunch of protesters the copper who was driving made their ride as uncomfortable as possible by deliberately and intermittently slamming on the brakes.
The irony of it all was that Brownie was a rugby fanatic and had gone there to watch the game. He must have stuck out amongst the uni student protesters like a Jap on Anzac day! The poor bugger was arrested with a bunch of protesters and was guilty of nothing more than being the mate of a smart-arse, who also did nothing that warranted arrest. 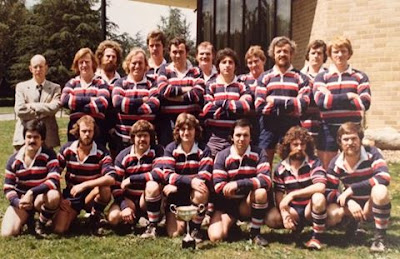 Unlike me, Brownie as an adult continued to play rugby, and in the last years of his life he became the president of Canberra’s Easts rugby union club. The above photo is of Brownie’s Easts rugby team in 1976, several years after the event that led to his arrest. Brownie is in the front row 3rd from the left. Thanks to Trout for the photo.
I went to the Civic Police station to see if I could get Brownie out without involving his parents, and I was told by the coppers at the reception to “Fuck off!”
I’m not sure exactly what happened with Brownie after he was taken to the station, but I do remember being told that his mum, who I always liked, (partly because she was never backwards in coming forward, particularly in matters concerning her kids), after learning about what had led to her son’s arrest, confronted Quoll and reminded him of the fact that I had run into him outside their driveway. 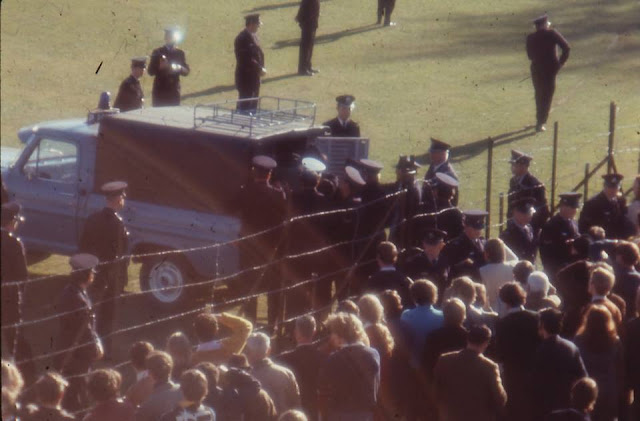 A better shot of the arrest area. Thanks to Billy Southern for the use of the photo.
Apparently he did not handle it well, as he must have realised it would not look good for him if the matter went to court. Other than that, I had taken down the name and contact details of a bloke who had witnessed what had happened, and he was willing to testify on Brownie’s behalf.
Brownie was eventually charged with having used indecent language. From memory they alleged that he had said, “All coppers are cunts,” or words to that effect that contained the words coppers and cunts.
One protestor who was also arrested and charged with using indecent language at the same time as Brownie was deaf and dumb.
When a copper fabricates a charge he has committed a criminal offence, and as such has gone to the other side and joined the crim’s he is paid to control. When that occurs he has no right to moralise or pretend he is a pillar of the community. And because I was there when Brownie was arrested, and I clearly remember what Brownie said, (or did not say), I believe Quoll was a criminal.
A criminal is defined as a person who commits a crime. The definition, as such, includes people who commit crimes but are not charged or convicted for such crimes.
Later on all charges against all protesters were dropped because of a legal technicality, although not before Brownie and I had seen a solicitor and made contact with the other witness, (who I got to know and still see occasionally).
My guess is that the real reason the charges were dropped was not one of a legal nature. I believe it highly likely that the whole thing was politically embarrassing for the government and that once the tour was over they thought it best to say as little as possible about it in the hope that it would all be forgotten. I also believe that a large number of coppers would have been exposed for charging people for offences they did not commit.
Quoll was very lucky the charges against Brownie were dropped. Had they not been dropped Quoll would probably have been exposed as a bullshit artist and a criminal when the matter was heard in court. And that would have been the best outcome he could have hoped for.
If Brownie had been charged and convicted for having used the indecent language he did not use, Quoll would not have known what hit him. A wronged Brownie was unstoppable. He would have ensured Quoll regretted the day he was born, and whatever Brownie decided to do to seek vengeance I would have been morally obliged to assist, considering I was the smart-arse who brought the whole thing on.
I hope Quoll, for his sake, saw the error of his ways, quit the police force and got a job as a clerk, where the greatest risk would be having a filing cabinet fall on him. He was clearly not suited for the job.
Now, although I have really given it to Quoll in this anecdote by publicly ridiculing the man, if he is still alive he will not suffer from what I have written nor will his reputation be tarnished, as I have not identified him. And I doubt anyone reading this yarn, other than the other witness to Brownie’s arrest, will know who he was or is. Had I retained a grudge against the man I could have identified him without risking being sued, because I can back up what I have written.
It could be argued that fabricating evidence related to a relatively minor charge, which is what Quoll did with Brownie, pales into insignificance when it comes to bringing the AFP into disrepute when compared to the proven and/or alleged actions and comments of the ex AFP commissioner, Mick Keelty, in relation to the arrest of the Bali 9 and what he said before the trial of Schappelle Corby.
In relation to 1 of the Bali 9, Scott Rush, whose father asked the AFP to stop him leaving Australia to prevent him being arrested in Bali, (which they did not do), a youngish copper I met said, to me “Keelty threw a hospital pass to every copper in Australia. What parent will ever trust a copper again?” And many Australians believe Keelty has blood on his hands in relation to the executions of Chan and Sukumaran.
When senior coppers and politicians talk about how they have no sympathy for drug smugglers and how they can justify cooperating with countries like Indonesia because they know they are saving lives by stopping drugs reaching the arms of addicts, they are insulting the intelligence of their audience. Corruption is a way of life in Indonesia, and drugs of a hard variety are always readily available as long as they are bought from certain people. Politicians and senior Australian coppers know that. Do the latter have any pride or self-respect or is that a rhetorical question?
https://en.wikipedia.org/wiki/Bali_Nine
I do not carry a grudge against Quoll and I sincerely hope he has had a good life, because although he behaved very badly by fabricating a charge against my mate, many years have elapsed since the event took place in 1971. And as I have said in many anecdotes and essays I have written, I have no right to cast stones against anyone because of their bad behaviour given that we all do things we regret, and I have done many, many things in my youth I regret.
Other than that, I don’t believe we possess contra-causal free will. And if you don’t understand what I mean by that last statement you may want to read the essays on the following links. They say nothing new, but they’re hard-hitting and very well-written, and you may find them liberating.
http://www.naturalism.org/philosophy/free-will/free-will-skepticism
http://ethicalfocus.org/free-will-the-last-great-lie/