TWO CANBERRA BOYS VISIT THE PHILIPPINES
by Nick McConchie
INTRODUCTION by Dave Wheeler-
This anecdote was written by my old mate, Nick McConchie. It tells of his narrow escape while visiting the Philippines in the early 90’s, with our mutual mate, the late Geoff “Fitz” Fitzgerald. I attended Dickson High with both Nick and Fitz.
When Australians travel to Asia they are warned of the draconian punishments most Asian countries have for persons found in possession of drugs or engaging in other behaviour that is dealt with far less harshly in Australia. Although most Australians realise the consequences of disobeying foreign laws, many, in their naivety, do not realise that they are taking a small risk by just visiting such countries without breaking their laws, as many tourists over the years have been set-up and have suffered many years in prison, and worse, for committing no crime at all. Most of Asia is rife with corruption, brought about by poverty and desperation, and to expect to be dealt with by honest police and to receive a fair trial in most Third World countries is like expecting the arrival of the tooth fairy. It is far easier for a middle class Australian to be moral than it is for people who battle every day just to get a feed. I spent a small amount of time in Thailand during my youth and had no problems, as has been the case with most tourists who have travelled to Asia, but you are far more likely to be in the wrong place at the wrong time in a Third World country than you are in Australia, as Nick will tell you. Why we have extradition treaties with countries that are so bent and why the Australian government does not openly criticise their legal systems for the corrupt farces they are, probably comes down to money, as in not wanting to disrupt trade. While there are live cattle to be exported (and tortured) and other commodities to be bought and sold, expect things to continue as they are.
In this introductory rant I have expressed my personal views, which are not necessarily the views of Nick McConchie.
Dave Wheeler
TWO CANBERRA BOYS VISIT THE PHILIPPINES
by Nick McConchie
The behaviour of the relatively new Philippines President Duterte, in allowing or indeed encouraging law enforcement officials to shoot first when drugs are involved, reminded me of the dangers of that country. In particular, I recalled an incident when I was in Manila during the early 1990’s.
I had travelled to The Philippines with my then wife and my 2 year old son. The purpose of the visit was to introduce my son to his grandmother and for my wife to catch up with her family. In order to alleviate potential boredom, I invited my friend Fitz to come along. Fitz features in other posts on this site.
One afternoon in Manila, Fitz and I left the family in our hotel and ventured out for a few drinks. We went to several bars and sunk a few cold ones. As the afternoon turned into night, we continued to bar hop and eventually found ourselves in a quieter street, a little way from the bustling tourist area. Our reason for leaving the relative safety of the tourist strip has been muddied through the effluxion of time. None of that actually matters. What matters was that we were in the wrong place at the wrong time. 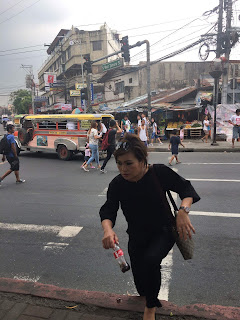 We were walking along the street, minding our own business, talking bullshit to each other while looking for somewhere we could quench our rapidly growing thirsts. A police vehicle stopped and two heavily armed policemen alighted and approached us. We were told that we were making too much noise and needed to accompany them. Not being in the business of arguing with armed Filipino police, we complied and climbed into their “ute”. Not much was said, and we assumed we were being taken to a police station – no such luck! After a short time, the driver turned into what appeared to be an empty car park. It was walled on three sides with an entrance on the fourth side. We were told to get out of the vehicle. As we did so, one of the policemen walked a short distance and stood there with his back to us. The other pointed his pistol at us. He said words to the effect, “My Sergeant needs money, how much you have”? 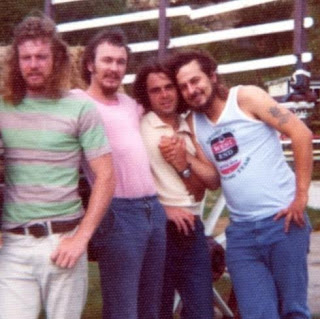 The photo above, taken in 1974, shows from left to right, Spud Murphy, the late Geoff ‘Fitz” Fitzgerald, Mick Gladwish and Nick McConchie, the author of this post. All of the above are ex Dickson High boys. The photo was also used in the essay, “ A Canberra boy reflects on his escapes,” because we do not have many photos of Fitz in his younger years.
At this point Fitz and I were a little concerned for our safety, though that fear was somewhat diminished by the alcohol that we had consumed. I cannot recall how much we offered in the first instance but it probably equated to $10.00 or so. We gave the money to the policeman who while still holding his gun, walked over to the sergeant. They mumbled a few words then the underling returned. “Not enough,” he said. We gave a little more. He again walked over to the sergeant and again returned saying “Not enough”. About the 3rd or 4th time we emptied our front pockets to show that that was all we had – about $60 between us. This time the Sergeant came back and said “OK”.
The underling, while waving his gun, then said, “You can escape now.” I did not know what Fitz was thinking at this point, as I had my own thoughts to contend with. My thoughts over the next 2 seconds ranged from – "If we run, then surely they will shoot us – justified as escaping prisoners. If we walk fast, we will be easier targets. If we don’t do anything, will they lock us up?”
We ran, zigzagging in some lame attempt to dodge any bullets that came our way. Normally, Fitz would have been a faster runner than me, but not that day.
As we ran from the compound and turned into the street, I was relieved that there were no gunshots. In today’s Duterte environment, we could easily have been shot as suspected drug felons. I digress however.
We jumped onto the back of a Jeepney, (a public transport jeep with colourful if not kitsch decorations). We were not obviously being followed, much to our mutual relief. Coincidentally, the Jeepney was headed through one of the bar areas of Manila, so now, in much need of a drink, we alighted and headed into one of the many bars that lined the strip.
Earlier in this piece, I mentioned that we had emptied our front pockets - fortunately we had more in other pockets. So, here we are, sitting in the bar, enjoying a beer or two, talking about our experience and how we were “gunna” bash the coppers and should have bashed the coppers and so on, when at the entrance to the bar, appeared one of the policemen that we should have bashed.
He looked straight over at us but did nothing. He left a minute or two later. After several more beers and perhaps some whiskey, we deemed it safe and returned to our hotel.
The next morning there was a knock on my hotel room door. I answered to a hotel employee, who held up a piece of paper and said “is this your licence? “ Indeed it was. He explained that he was hotel security and he knew what happened, and with his help we could sue the police for a large amount of money. I took my licence, which had obviously been given to him by one of the policemen, though I had no recollection of giving it to him in the first place, and politely declined his offer.
Over the course of the next few hours, every hotel employee (I exaggerate), but a number of them, asked how long we were staying, when are we leaving? What airline and what time? Paranoia began to set in. At this point, what could we do? So Fitz and I crossed the road to an open air bar and had a few beers, while trying to decipher what it all meant (the meaning of life at that instant). We were there for a very short period of time, when a truck pulled up, and half a dozen policemen dismounted and came into the bar. They simply stood around, giving us perhaps furtive glances, whilst talking amongst themselves. They left quite soon after their arrival. Paranoia?, I do not know, but we were becoming quite uncomfortable with the situation.
We were booked on a flight out the following night. Hotel staff were offering to arrange transport. What time you want? Where you go? And so it went on. We had visions of perhaps being robbed on the way to the airport or worse. It just seemed very peculiar to us. I was of course concerned for my wife and child, so around lunchtime that day, without checking out, we walked out and caught a cab to the airport. We arrived at the airport safely albeit some 12 hours before our flight. How did we alleviate the boredom? – At the airport bar of course! 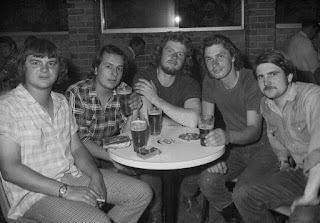 The photo above shows the author of this post with a group of his mates in Kings Cross in 1970. They are from left to right, the late Brent Bolas, Nick McConchie, Spud Murphy, Keith Dickerson and Max Duncan. Max played an incredibly good blues harmonica and often accompanied Spud, who was on the voice and also played the blues harp.
For more mainly Canberra-based yarns hit the Home button above.