LEGALISED CHILD ABUSE AT SCHOOLS IN THE CANBERRA DISTRICT DURING THE 20TH CENTURY.

LEGALISED CHILD ABUSE AT SCHOOLS IN THE CANBERRA DISTRICT DURING THE 20TH CENTURY.
Matters relating to very serious child abuse that occurred during the 20th century have been brought to the public's attention during the last 20 years and are well-documented. I refer to the theft of Aboriginal kids, sexual abuse of kids in institutions and the abuse and virtual slavery of Pommie orphans who were placed in Australian institutions after WW2.
It is because corporal punishment in schools during the 20th Century was mainstream, of a less immoral nature than child theft or sexual abuse and usually carried out with the permission of parents, the matter has been virtually ignored and is not at all well-documented. With this in mind the purpose of this particular yarn/rant is to record incidences of legalised child abuse in schools in the Canberra district during the 20th century which involved humiliating kids or perpetrating acts of physical violence upon them.
It of course occurred throughout Australia during this period, but as this blog is Canberra and districts-centric I am confining the documentation to Canberra and surrounding districts. 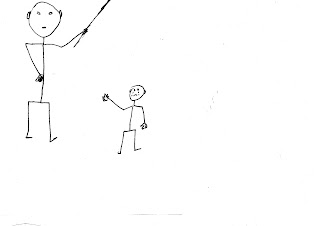 Let's however, go back in time to when Benedict House in Queanbeyan, which is now a cafe, restaurant and craft shop, was running as St Benedict's Convent. If the following information supplied to me by a person who recently visited the place is correct it would seem the abuse at St Benedict's was rife until its closure.
"Last month I had lunch at the cafe at Benedict House. As I was interested in the story of the old building I asked one of the women working there about its history. She explained the rooms downstairs were once classrooms and the nuns and the female students slept upstairs. She said that many nuns and ex students had visited in recent years and their memories have been written down and a book has been produced. She said there seemed to be too much of an emphasis in the book on the punishments the nuns gave the girls rather than an emphasis made of the positive happenings at that time. Therefore they weren't making the book available for sale to the public."
Footnote on the above- If anyone would like to contact me disputing the information I was given regarding the said book about St Benedicts being withdrawn from sale for the reasons stated please do so.
The Australian historians who, through self-censorship during the 20th century, decided to distort our history by not telling students about Aboriginal massacres and the abuse of Aboriginal children, are now despised for revisionism by way of ommission. If the previously mentioned book that records memories of Benedict House is not being made available to the public because of a desire to censor history those responsible should also be condemned.
In regard to further comment about abuse in Catholic Schools, I can recall many years ago being told by a girl several years older than me who had attended Catholic Girls' High in or around 1960, (It is now called Merici College), about a nun allegedly hitting a little puppy which was running around the playground on the head with a heavy stick, causing its death. I worked with a temporary worker about 10 years ago who had attended the school during that period and when I asked her about it she told me she had witnessed the event and that what I had been told was accurate. She also told me she cried her eyes out for the rest of the day and all that night and that it caused her a lot of trauma.
If anyone would like to dispute the event regarding the puppy occurring please contact me.
This post will be an ongoing project with stories of abuse I receive added on as I receive them. If anyone would like to contact me giving details of abuse they have suffered or witnessed in schools in the ACT or surrounding districts during the 20th Century please do so by email by clicking on the contact button above. Your name does not need to be published and the teacher/s responsible for the abuse will not be named.
Dave Wheeler
UPDATE 12/2/16
I received yesterday the following email. For legal reasons I am not publishing the name of the author of the email or the teacher he is referring to.

Hi Dave,
I read your piece on corporal punishment and violent Canberra teachers. I wonder if you have any information on a teacher called Mr----------- who was at Campbell Primary school around 1969 and the early 1970's. He was a true sadist and psychopath. He was obsessed with building canes in the craft/woodwork room and loved caning children. He provided his caning service for all the school with such a passion and urgency. He actually whimpered audibly with excitement when he did it.
Aside from caning he could be very violent physically and I was one of many kids that was violently assaulted by him. Today he would be jailed for a fraction of what he did to children.
Regards,
-----------
FOR MANY MORE MAINLY CANBERRA-BASED YARNS HIT THE "HOME" BUTTON UP THE TOP.