DICKSON HIGH KIDS LOST IN THE MOUNTAINS IN 1975

DICKSON HIGH KIDS LOST IN THE

It was March 1975, a time before personal computers or mobile phones. I was in Sixth Form, or Year 12, at Dickson High School, now called Dickson College and we were all going on a school excursion to Guthega for 5 days.
Our year filled one large bus and a mini bus which travelled together in convoy. During the entire trip those of us on the large bus enjoyed ridiculing those friends on the mini bus and they ridiculed us in return. Their bus resembled the small buses that were used by Koomarri, which was a place for the mentally and physically challenged at that time. Chants of “Koomarri, Koomarri” continued and served to annoy those on the mini bus. So the trip began, two buses full of young people oozing with excitement and high spirits. On arrival at Guthega we were soon organised into our chalets which were roomy with large central lounge areas and real fires crackling in the hearths. It was late summer, so there was no snow, it was a time to enjoy this new environment and study it.
Our first work was an organised walking expedition which was meant to take about half the day. The  plan was to travel by buses to Thredbo, then catch the chair lift up to the mountain range behind Thredbo, and go on a half day walk. We had at least 4 teachers with us and we all looked forward to the experience. The day was fine and sunny so wearing wet weather gear we thought was unnecessary.
Soon after alighting from the chair-lift and walking for half an hour or so, the weather changed dramatically. We seemed to be engulfed by a misty fog, the temperature dropped, the wind came up and it began to drizzle and sleet. We thought the teachers knew the way, so we all confidently followed along behind only to become increasingly wet, cold and miserable. There was no actual path to follow, perhaps if there was the meadow grass had covered it over spring and summer. Due to poor visibility we were glad the teachers brought a compass to follow. One of the students at the front of the group held the compass, none of us realising until too late that his large wristwatch interfered with the magnetic field of the compass, sending us in completely the wrong direction.

The above photo is of us at a stage where we had the feeling we were lost but were not quite sure.
Our clothes were not waterproof and it didn’t take long for us to realise things were going wrong. We were told to stop at intervals while the teachers seemed to confer with each other in worried whispers with much hand pointing. One teacher walked up onto a rocky outcrop to view our surroundings which proved futile with the fog shrouding us. The wind and sleet were coming at us sideways. Like penguins we clustered for warmth in groups of three and four linking arms to trudge on. A few students were showing worrying signs, one complained of severe cramps and others were slowing and lagging behind. One of the girls had recently recovered from anorexia, and still being under weight, we were very concerned for her as she was really feeling the cold and leaning on her friends for support.
The teachers called a halt when we noticed we had gone in a complete circle. We followed the teachers down into a natural valley or hollow where the wind wasn’t as strong, then they asked us to gather around closely. The senior teacher announced “We are lost” which was no news to us. He then suggested as it was now almost dusk, that we should try and sleep the night where we were standing, in the slightly sheltered hollow. We had no camping equipment, no food, in fact nothing except the wet clothes we were standing in. None of us moved, while contemplating his words. Another teacher seemed to have a discussion with the head teacher after which he announced we would make one last attempt to find our way. Two students, Peter Tuckerman and Peter Colquhoun and two teachers were to walk in four separate directions but they were not to walk further than their line of sight to us. They were asked to look for landmarks I presume. 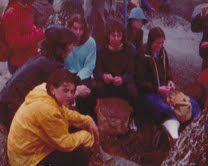 This photo shows us when we were cold and miserable and waiting for the look-outs to find a way of ensuring we did not perish.

Unbelievably one of the four look-outs came across a lone hiker. The hiker came over to us and spoke to the head teacher instructing us to walk in a certain direction for another mile or so along a narrow track, then we should see a line of snow poles and a blue metal road which we should follow to Seaman’s Hut which would give us shelter.
By this stage my lower back was cramping from the cold, I couldn’t feel my hands or feet, my ears were burning, icy water dripped from my hair and squelched from my shoes. It was foggy and grey, wet, windy, cold and miserable. We continued slowly on, and finally reached Seaman’s Hut, a two roomed hut made to shelter walkers at times like this.
I found out later that the hut was built in 1929 with finance from the parents of Laurie Seaman who died in a blizzard in 1928 close to the hut’s location. Laurie’s mate also died in the blizzard. I’m sure the Seaman family took some solace knowing the hut would save the lives of many over the years. The hut is fairly close to the summit of Mt Kosciusko.
We all stood shoulder to shoulder crowded tightly together in the little stone hut, while one or two suffering early signs of hypothermia were attended to in the other small room and placed in the beds there. One of my best friends kept having to rush outside to vomit, another sure sign of exposure. Soon the warmth from our bodies coupled with our wet clothing caused a new mist to rise all around us in the hut. It was so foggy in there that it was difficult to see the person beside you.
There was no form of communication in the hut that we could use to call for help and by now it was dark. Two students, Peter Colquhoun and Peter Tuckerman and a teacher volunteered to walk down the road in front of the hut which was then called Summit Road, now it is Summit Walk. They walked perhaps for a few miles, to Charlotte’s Pass to the hotel to alert the authorities and get help. They were our heroes that day as they did exactly that. Rangers in two Landrovers arrived with their headlights beaming and shuttled us back and forth to Guthega, beginning with those most affected by the cold. Two students were admitted to hospital overnight.
I remember we were met at our chalet by Mrs Clarke, the home science teacher, who handed each of us on arrival a steaming mug of minestrone soup. That soup is the most delicious soup I have ever tasted to this day. Others I have spoken to since, agree.
Needless to say due to this experience occurring in the first day or two of the planned excursion week, very little was asked of us for the remainder of the week. In fact we had absolutely no work given to us and we made it clear we were not willing to do any as a group. We partied every night and the boys even stole the male teachers’ beer from their room but remembered to leave a thank you note and money. There were no repercussions.
I clearly remember waiting in the sun on the last day for the buses to collect us to take us back to Canberra.  Standing near me were all my friends, including Sharon Selley, who was very attractive and curvaceous. As we chatted in groups, one of the teachers began to hold up the lost property. The last item held up was a very small cupped, tiny lacy bra. The teacher held it over his own chest and exclaimed “Who owns this? ... There’s one thing I can say for sure, it sure isn’t Sharon Selley’s!” There was much laughter sealing the end of a never to be forgotten school excursion.
FOR MANY MORE MAINLY CANBERRA-BASED YARNS HIT THE "HOME" BUTTON UP THE TOP.
Posted by Dave Wheeler at 15:55