This true story was written by my mate Dennis "Spud" Murphy, who I went to school with in Canberra. Spud grew up in the Berra and began singing and playing the blues harmonica in local blues bands in his teenage years, as well as at "Folk, Blues and Beyond," a venue that was held in the hall at Corroboree Park. He has continued to sing and play the blues to this day but now lives in Hobart.
Dave Wheeler

TEENAGE QUEEN
By Dennis Murphy
In September ‘59 my Uncle Frank picked my family up from the Woolloomooloo docks in a new, blue and white, FC station wagon. It was my first day in Australia and he drove us from Sydney to Canberra via Mittagong, Goulburn and Collector. We arrived in the ‘berra at dusk and the first thing he showed us was our new home - a block of land in the then infant suburb of Dickson with a slab of concrete on it.

Two days later my father, Tommy Murphy, an Irish bricklayer, was introduced to two other Irish bricklayers by my uncle. One of the bricklayers was named Paddy Prentice. The three men then proceeded to build a garage that was to become our home for the next eighteen months, until my father was able to finish building our house.

A recent photo of what was the Murphy family home at 81 Cowper Street, Dickson, showing the garage that is referred to in the last paragraph.
I can remember Paddy because he was often around at our house. He had a son “Kevin” who was a year older than me, a daughter Rosemary, who was the same age as my older sister (about two and a half years older than me) and a younger daughter who was at least five years younger than me. Paddy’s wife seemed quite tall and fair whereas Paddy was more olive in his complexion and short.

I bumped into Kevin occasionally over the years and it was always in a pub. He inherited his height from his mother’s side of the family and as a result was a reasonably big bloke. His complexion was somewhere between his mum’s and his dad’s. Kevin was a bricklayer like his dad and a likeable larrikin. He was an archetypal Australian for his generation.

I saw quite a bit of Rosemary as we visited the Prentices’ and they visited us. Rosemary also used to come around to see my older sister, Rita. I remember Rosemary lent my sister a couple of 45 singles. One was “Teenage Queen” by Johnny Cash.

I was about eleven or twelve at the time so Rosemary would have been fourteen or fifteen. I liked her more than my sister’s other school friends because she was the friendliest and in my opinion the best looking of my sister’s friends.

My sister lost touch with Rosemary as Rosemary left school early, probably to become a hairdresser. I say that because she always looked very glamorous and well groomed.  Looking back she had a beautiful face with big blue/green eyes. Her hair was dark.  A year or so later I picked up from a conversation between my mother and Rosemary’s mother, that Rosemary was going through a rebellious phase.

The last time I saw Rosemary was when I was about 15. It was at the Canadian Hell Drivers show at the Canberra Showgrounds. The Hell Drivers were a bunch of four wheeled Eval Knevals’ doing death defying stunts. 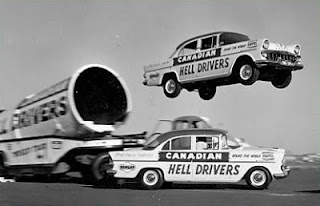 I entered the showgrounds in dazzling fashion. The security guards who were dressed in white lab coats had cut off all the gate crashers at the only point where we could sneak in. Rather than turn back I decided to try my luck.

The security men were not very athletic so I broke from the pack of forty or so prospective crashers and ran at the guards. Playing on the wing in both league and union I had reasonable evasive skills and acceleration. I split the defence and most of the other crashers followed my example. The quicker kids made it through.

I sat down near a group of older boys who belonged to the bodgie subculture. Some of these blokes had girls. One of the girls sitting down was Rosemary who was probably seventeen at that time. She was sitting up against some lucky bloke. I caught her eye and we smiled and waved. It was sunset and she looked great. At this age I was experiencing the suicidal attraction that youths develop for the opposite sex.

The next I heard of Rosemary was from my mother who was very distraught. She advised me that Rosemary had been  killed in a car crash. That was in mid 1960’s. Paddy an emotional man at the best of times, and his wife were devastated.

I am still a Johnny Cash fan and I have played his songs for years but for some reason just recently “Teenage Queen” triggered off my dormant memory of Rosemary. Life is such a random thing.
Dennis Murphy
The first photo below shows Spud Murphy in recent times accompanied by his blues harmonica, singing and blowing at a venue in Hobart. The drummer is Trevor Pearce and the guitarist is Rob Harwood. Dennis Murphy sings the “Breaker Morant Waltz” on the embedded youtube clip BELOW.


The photo below shows Spud Murphy (on the left, running in front) and his mates in or around 1970, in the Berra. The expressions on their faces displays the exuberance of their youth.The lads running behind Spud from left to right are Rob Thomsett, the late Peter Spellman, Erik Olbrei and the late Tom Parvey. 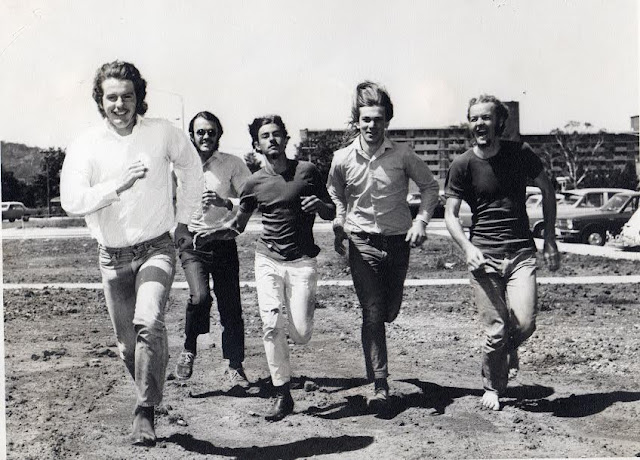 FOR A SELECTION OF MANY MORE MAINLY CANBERRA-BASED YARNS CLICK ON THE “HOME” BUTTON ABOVE.