ROBYN FROM NARRABUNDAH
By Wayne Riley
This true yarn was written by a mate named Wayne Riley, another Canberra boy.

Dave Wheeler 30/4/13
It was a Friday night, probably in 1968, and I was 19 or 20 at the time. I was at the "Chapter One" nightclub in Civic, which was started in 1966 by the Hewsons. It was a dollar in and 25 cents a schooner back then and one of the few places where the number of female patrons was at least as many as the number of males.They also got Australia's best bands there at one time or another.
It was pretty dark inside though, apart from those strobe lights that seem to slow down everything. So people sat at tables or stood at the bar, but you couldn't tell exactly what people looked like till you got up close.
I went up to two reasonably attractive girls sitting together at a table and asked one of them to dance. Her response was, "Fuck off!" I walked back to the bar dejected.
I drowned my sorrows for a while but decided to have one more shot when I saw a very pretty girl who looked to be a couple of years younger than me sitting at a table by herself after her friend had headed off to the toilet. She was wearing a summer dress that was cut fairly low from her shoulders, revealing a shapely figure. She had long light brown hair and was in her prime.
My heart was pumping hard as I summoned up the courage to approach her, but my conversation skills were limited and as the music was loud I had to shout to be heard anyway, so it was not ideal.
"Would you like to dance?" I asked.
"No thanks," she replied.
"Can I buy you a drink?" I tried again.
"No thanks," she replied.
"Can I sit and talk to you?" I persisted.
"No thanks," she again replied.
I was as hard of thinking as I was of hearing, so I then said,"Would you go out with me next week for a meal and a drink?"
She looked at me and said "Okay," then took out a pen and paper from her handbag and wrote down her name and address and gave it to me.
"I've got to go now," she said as her friend returned.
"I'll pick you up at 6 on Saturday then?" I asked.
"Okay," she replied as she walked out the door with her friend.
I looked at what she had written and could see that her name was Robyn and that she lived in one of the streets in Narrabundah which at the time had numbers as names. Other than the Causeway, the numbered streets of Narrabundah were the closest Canberra had to a slum. The area was renowned for its roughness and criminal element, although it also obviously contained many residents who were nice honest people, and I was hoping I'd picked a girl who fell into that category.
Driving down her street on Saturday I must have carried a worried look as I passed rundown houses and others with an occasional broken window with car wrecks on the front lawn. I drove to the house with the right number and pulled up next to the kerb, staring at the place.
On the front lawn was an old FX Holden with three very mean and unsavoury looking characters who looked as if they were on day leave from Goulburn Gaol working on it. I was wondering whether to risk it but thought, "No, she seemed sincere." So against all my instincts and common sense I got out of my car and strolled up to the house trying to put on the toughest voice I could use.
The bloke under the bonnet of the car saw me first and came out and stood there looking at me as if he was going to either talk to me or spit at me.
"Yeah mate, what do yer want?" he muttered.
"Um gidday mate, I'm looking for Robyn," I replied.
"Robin? Ya wanna see me brother Robin?" he replied.
Like a bolt of lightning I was made instantly aware that the girl who called herself Robyn had been having me on. I don't know if her real name was Robyn and she shared her name in pronunciation with a Narrabundah tough boy she knew or whether she had another name and just knew the name and address of a Narrabundah tough boy named Robin. She may have even been Robin's girlfriend.
Whatever the case, if Robin grew up in the numbered streets he would have been teased for having a name which could be pronounced like a girl's name and he would probably have been very sensitive about it. 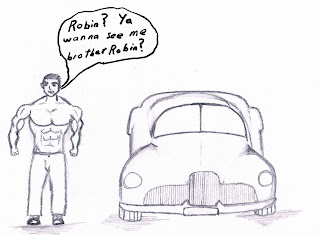 Robin's brother was at least friendly when he replied in a deep and rough voice, "Sorry mate; Robin's shot-through. He won't be back for a few hours."
My heart sunk as I began fishing for my keys in my pockets so I could perform a quick exit.
"Thank Christ," I said under my breath, but instead said, "Oh, okay then, thanks."
I started to walk back to my car when Robin's brother yelled out to me,"Who'll I say was lookin for im mate?"
"Um, just tell him it was Jack. See you mate," I replied.
I got back in my car and drove off very slowly as I  considered staying away from Chapter One for at least 6 months or until I could grow a beard.

FOR MORE MAINLY CANBERRA-BASED YARNS CLICK ON THE "HOME" BUTTON ABOVE.
Posted by Dave Wheeler at 17:01