A CANBERRA BOY GOES FOR A SUNDAY DRIVE ALONG SMITHS ROAD

A CANBERRA BOY GOES FOR A SUNDAY DRIVE ALONG SMITHS ROAD

I once bought a book entitled “Do it yourself surgery.” I was initially very pleased with my purchase, but when I got it home I became very disappointed after I found out the appendix had been removed.
Yeah, I know, it’s an old one, but I still chuckle to myself when I think of it. It also reminds me of a story I was told about 40 years ago about a bloke who was living on a property that ran off Smith’s Road, via Tharwa, who engaged in some “do-it-yourself" surgery.
Before I get to that story I will tell you a bit about Smith’s Road. If you travel just outside of Canberra to Tharwa, then follow the Naas Road towards Namadgi Park, the Smiths Road turnoff is a few k's on the left. It's mainly unsealed and extends about 30kms from Tharwa before coming to a dead end. It runs parallel to the Murrumbidgee River but would average around 1.5 kms in distance from it. You can however, turn off and go through a pine plantation and some farmland to Angle Crossing and onto the Monaro Highway if you like, but the ford over the Murrumbidgee is impassable after continued heavy rain. The furthest part of Smith’s Road from the Berra is in NSW. 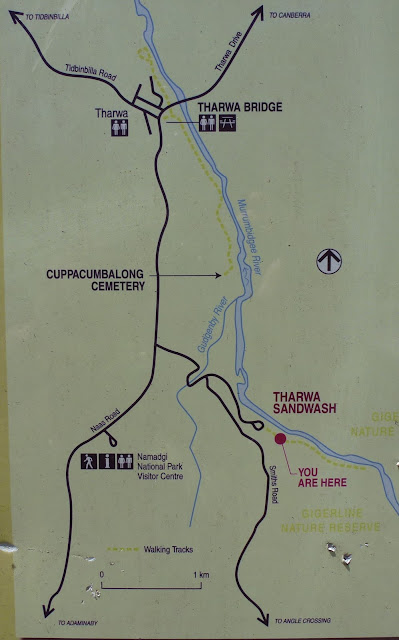 The beginning of Smith’s Road is shown above where it turns off Naas Road at the bottom end of the map.
Smiths Road is a nice drive if, like me, you enjoy driving slowly, as it's winding and mostly unpaved. It's not hard to imagine travelling along the same road 100 or more years ago, assuming it was there 100 years ago, which it probably was. You'll find along the road several ruins of very old houses in the form of chimneys/fireplaces standing by themselves.
I almost bought land at the end of Smiths Road about 15 years ago but decided against it when I found there was a push for it to be fully sealed. That would defeat the purpose of my buying it, as I would want to use it to escape there in the weekends, and a sealed road would encourage more humans to go there. That was the last thing I would want if I had a bush block.
Yet, I can understand those Smiths Road residents who work in the Berra and who commute to work every day wanting it sealed. Those living at the NSW end would take a lot of time to get into the Berra and it would be hard on their vehicles. 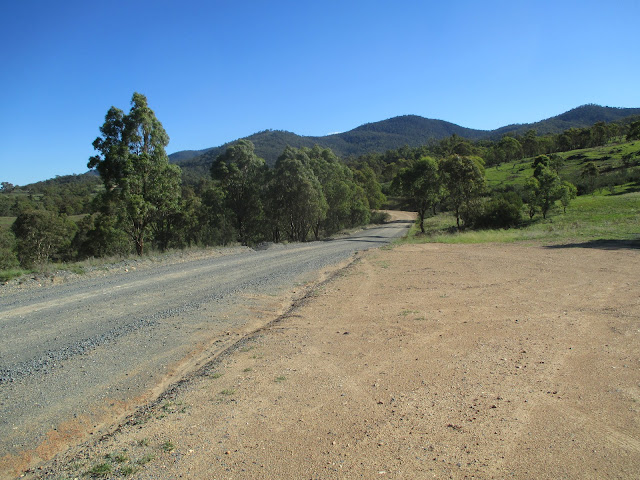 The above photo was taken towards the end of Smith’s Road. After getting out of my car I urinated, drank some water, did some shadow boxing, a few push ups and some stretching, then some slow and deep breathing as I took in the fresh air. That made me feel really good, but I felt even better as I began doing nothing other than savour the silence, the sunshine, a pleasant breeze and birdsong. I would not have been dead for quids. 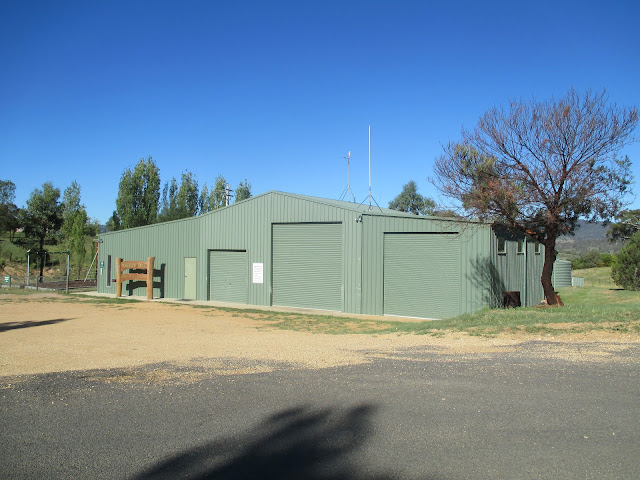 The above photo is of the Smith’s Road bushfire shed and community hall. 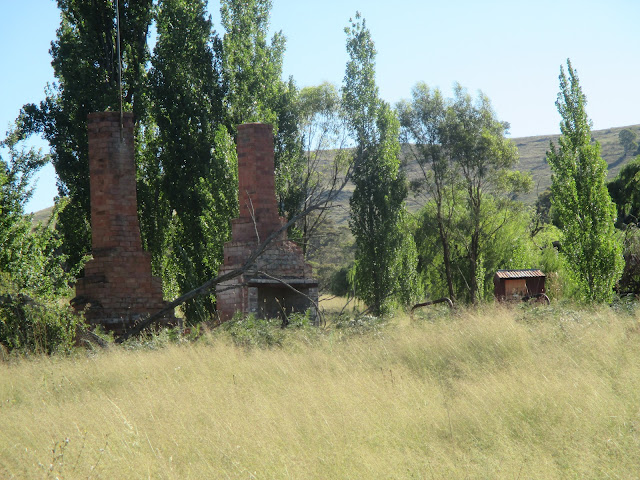 Above are a couple of chimneys that are situated towards the end of Smiths Road on the right as one drives into it. That is all that remains of the old house other than its outside dunny. When was this house built? Was it in the 19th century? When did people stop living in it? What events occurred around the fireplace? Did happy families live in the house, where they sung around the piano and had Christmas lunches with their relo’s? Did the fireplace ever witness violence and disharmony? Were babies born in the house and/or was there death and sorrow around the fireplace?
Did Blue castrate himself in that house? If so were his testes consumed by his kelpie who did not want to waste good protein? What other stories could those chimneys tell? 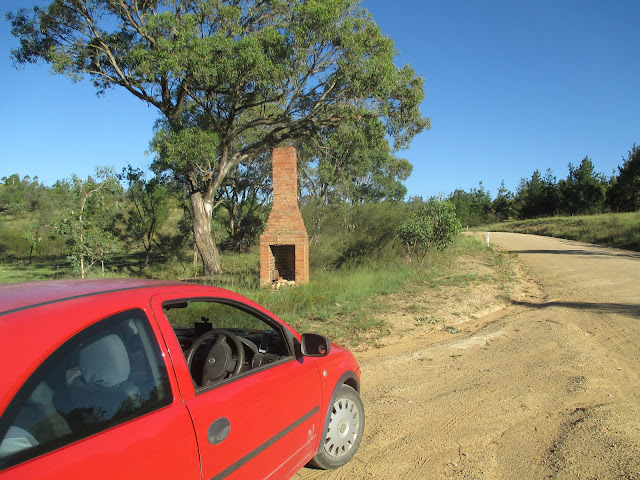 The old chimney above is on the left when driving along Smiths Road from Tharwa.
Again, when was this house built? Was it in the 19th century? When did people stop living in it? What events occurred around the fireplace? Did happy families live in the house, where they sung around the piano and had Christmas lunches with their relo’s? Did the fireplace ever witness violence and disharmony? Were babies born in the house and/or was there death and sorrow around the fireplace? 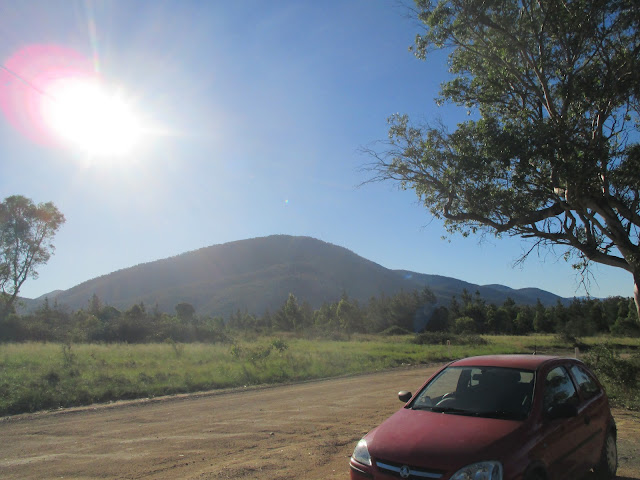 The photo above was taken from the other side of the chimney in the previous photo showing the view its owner would have had. As the chimney is right next to the road I doubt the road would have existed at the time the house was built. There was probably only an ungraded track leading past the house. Was the house made at the same time John Tennant the bushranger roamed the slopes of yonder mountain shown in the photograph? The said mountain, Mount Tennent, was named in Tennant’s honour even though in doing so they misspelt his name.


I was contacted indirectly via email by a lady yesterday who said she had spoken to her cousin’s father in law who is in his 80’s and had lived in the Tharwa area when he was young. He said there was truth in the latter self-castration story but got quite cranky about being asked about it and said that the dead should be left in peace, or words to that effect.


I asked via a mate a Smith’s Road resident who’d lived there for about 30 years if there was any truth in the story and he said he had not heard it. That however, would not be surprising if the event occurred around the time of my birth in the early fifties, because that was close to 70 years ago, and most of those who were around at the time would either be brown bread or would have moved on.


If any readers know anything about the alleged event let me know via the email link through the CONTACT button up the top, as several readers have expressed an interest in getting more details and being able to find out if it really occurred or if is just a rural myth.

FOR MANY MORE MAINLY CANBERRA-BASED ESSAYS AND YARNS SCROLL UP AND CLICK ON THE HOME BUTTON.
Posted by Dave Wheeler at 18:36