INTRODUCTION
The following factual yarn, which is subtitled "Gold Fever," was written by my dad, the late Roy Wheeler, after a trip we did to Condobolin in 1965. Roy had an interest in finding and restoring veteran and vintage motorcars. I have fond memories of accompanying him and my brother, the late John Wheeler, as we searched around western NSW looking for old cars and old car parts, even though I never continued my dad’s passion in that respect. During those times we met some very interesting people, including one old bloke named Stan Symonds. Stan lived by himself on a property several miles from Condobolin. As the trip was done in August of 1965 I would have been one month short of my 13th birthday.
Dave Wheeler


GOLD FEVER
by Roy Wheeler
He was 81 years old, short, spare, unwashed with bushy eyebrows and plenty of ear and nose hair. His name was Stan Symonds.
Stan was a bachelor and he lived contentedly on his run-down sheep farm several miles from Condobolin, a quiet town in central western NSW. He had his two dogs for company and they had the run of his two-roomed house. One room was for sleeping and the other room was for everything else. There was no bathroom or laundry to complicate Stan's life. I suspect the dogs helped to keep him warm on winter nights.
We arrived about dusk on a cold August evening in 1965, having been told there were rumours of an ancient car near his house. He was a bit wary at first but soon warmed to us and invited my two boys and me in to sit by the fire.
The old car, a 15 hp sleeve valve Daimler, built in or around 1910, had been left on his farm by a rabbit trapper back in the 1920's, after it had broken down. It was unlikely the rabbit trapper would return to claim it after 40 or so years.
We looked at what was left of the car by torchlight and hurricane lantern and quickly agreed on a price. We then got down to the real business of the evening.
Stan had gold fever. He was convinced he had gold on his property and for the last 20 years he had been digging a hole in the back paddock. He was sure he was close to the gold now, and in spite of the cold and the darkness, insisted that we drive him across the paddock to see his gold mine.
The hole was about 2 metres wide and quite deep. Carrying the hurricane lantern, Stan climbed down two splintered ladders, wired together to give the necessary length. He pocketed some rocks and climbed out.
Back in the house he took one of the rocks and held it in the fire with some blackened tongs. He explained that when heated the rock would give off gold gas, proving he was close to the real stuff. My boys weren't quite sure they could see the gas, but I made Stan very happy by telling him I was quite sure that gold gas was coming off.
The next day some of the remains of the old car were soon loaded on the trailer and we arranged to return in a week or two to take the  rest of the vehicle. The work done, we squatted in a circle to enjoy a good cup of tea. Stan liked the homemade biscuits so much we had to leave them with him.
Ceremoniously, he then presented us with a jar of water to which a handful of dirt from his mine had been added. According to Stan, if you shook it and peered into it, it behaved like one of those new fangled TV sets. Last ANZAC day he had shaken his own jar and had seen a Scottish pipe band leading the march into town. It was more evidence that he was getting close to the gold. We were duly thankful.
Stan also confided that he was very worried now that he was soon to become very rich, because there was a woman in town who had her eye on him.
After picking up the rest of the old Daimler not long after our initial meeting I had no further contact with Stan and have often wondered what happened to him. It was not gold-bearing country and I'm sure he never found his gold reef. Did he die in his paddock, did the old ladders collapse leaving him trapped in his mine or did the woman in town get him? I can't imagine him in a retirement home, well-washed and without his dogs. 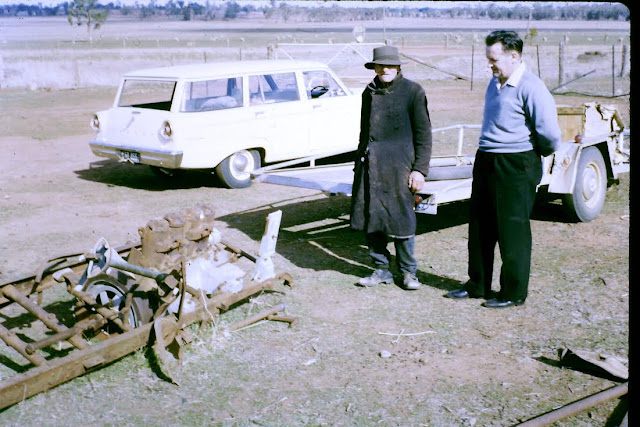 The photo above, taken in 1965, shows the late Stan Symonds on the left and the late John Downes on the right. John and his family were our neighbours when we lived in the Canberra suburb of Ainslie, and John's remaining family are still good friends with our remaining family. John assisted us in picking up the remains of the 1910 Daimler, as shown, not long after Roy had purchased it from Stan. I looked up Stan's name and found an entry in the Condobolin Cemetery which indicated he died on the 17/12/1971, aged 85. This means he would have been born in or around 1886 and that if he was alive in 2018 he would be around 132. He lived in a very different world.
Dave Wheeler

UPDATE- 10/10/18 “A CANBERRA BOY RETURNS TO CONDOBOLIN IN 2018"
by Dave Wheeler
Time has flown since August of 1965, which was when I, a mere boy one month short of my 13th birthday, my dad and older brother, visited  Condobolin and an 81 year old sheep farmer named Stan Symonds, who lived several miles outside the town.  Although it is 2018 and I'm now 66 I can recall the trip as clearly as if it occurred last week.
As I’m retired and have few restrictions in my life, on the 4/10/2018 I decided to set off for a drive and found myself on the highway from Forbes heading towards Condobolin, a town I had not visited for 53 years.
While on that highway it brought back memories of the times I spent travelling out west with my now deceased brother and dad. I could have become depressed had I dwelt on those memories, so I chose not to focus on them once I became aware of their existence and instead let my focus return to my here-and-now. What’s the point in feeling miserable? Other than that, my here-and-now offered me a lot of pleasure. I find driving on the flat western plains with very little traffic meditative and refreshing; the very opposite of city driving, with its hectic pace and high traffic density. Also, simply being away from a city can recharge one’s metaphorical batteries, and the Berra has become too big, overcrowded, hectic and draining for my liking.